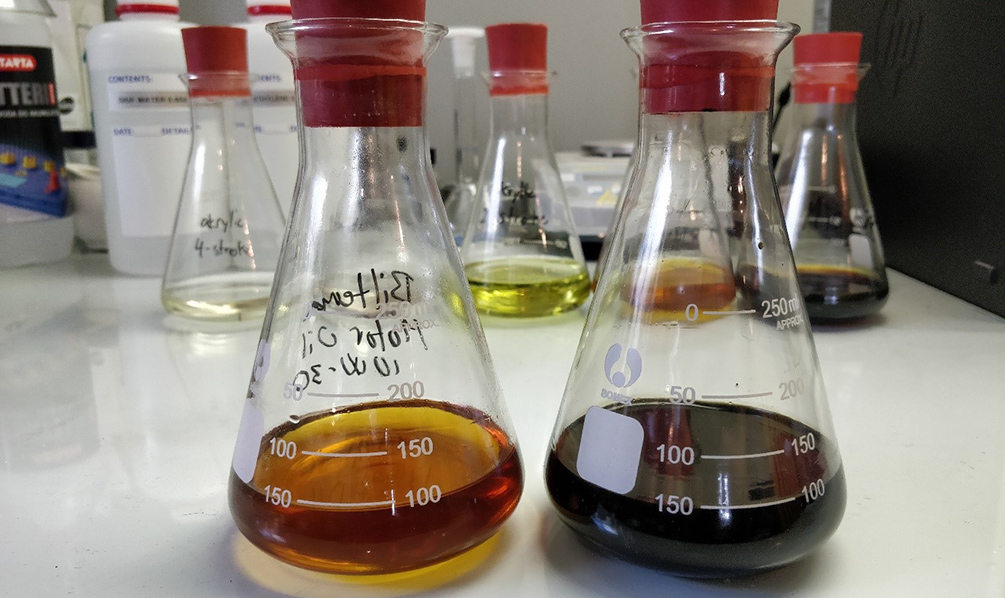 Petroleum products are common throughout society. They are found in homes, farms, and industry. Here we will investigate the thermal conductivity of a few such fluids found at a small farm. Samples range from volatile petrol to thick chain and bar oil.

For this project, the Thermtest THW-L2 liquid thermal conductivity meter was utilized. The instrument is a Transient Hot Wire device and follows ASTM standard D7896-19. A description of the method is found on our THW-L2 product page, but in short the method can be described like this: During a Hot Wire experiment the wire used as a probe is submerged in the fluid to be tested. The liquid should be at a stationary temperature and the convection should be minimized before testing. The wire is then gently heated with an electrical current during ca 1 s. The short heating time minimizes the risk of convection forming due to temperature gradients around the wire. The temperature increase of the wire during measurement time is recorded and from the slope of the resulting temperature vs. time curve the thermal conductivity of the sample can be derived.

The Hot Wire method is a primary method for testing fluids, and it was developed for this very purpose. The conductivity is calculated directly from the test data and adjusted with a single offset calibration.

All samples were collected from original containers, except for the 95-octane petrol which is from a gas station tap and the waste oil which was extracted from a Ford 3600 tractor after over three years of use. As a comparison, the waste oil can be seen next to new engine oil in the following picture.

All testing was performed at room temperature, ca 22 °C.

The lighter products have a lower conductivity as compared to the heavier oils in general. Interestingly, the alkylate petrol has a significantly lower value than the standard 95 octane petrol. It can also be noted that alkylate petrol is a very clean product, without the characteristic strong smell of standard gasoline. Another thing to notice is that the waste oil has the highest conductivity of the petrol products here tested, but it is not with a large margin. The exact type of oil is of course unknown, but due to the Swedish climate it is quite likely to be 10W-30 oil or similar. An even higher thermal conductivity value for the waste oil would not have been surprising as it should contain a fair amount of metal particles, which could enhance the conductivity, but a large fraction of the particles might have sedimented before the sample was extracted, limiting the effect.

The THW-L2 preforms as expected when testing these samples. The standard variation in the results is low and the data is deemed accurate. The battery water reference confirms this. Testing could be extended to higher temperatures, as the THW-L2 allows testing up to 100 °C. Cleaning of the probe and sample holder between tests was easy, here performed with alkylate petrol.

If you want to know more about testing fluids with the Hot Wire method, please contact us!

We use cookies to ensure that we give you the best experience on our website. If you continue to use this site we will assume that you are happy with it.I AcceptPrivacy policy